The last two months have flown by and we’ve been busier than normal. One might have thought “quarantining” in Kenya would have been more relaxing! 🙂

Actually, we are not technically quarantining. We are social distancing and staying at home . . . mostly. Covid-19 numbers in Kenya are steadily rising but testing has been mainly limited to those with symptoms.

On the 15th of March, the government of Kenya announcement that all schools would close the following week. As a college, Moffat was directed to close by the 20th. Luke’s and Kate’s school (Rift Valley Academy) had actually begun the closing process even before the government mandated closure. RVA needed to send all of their boarding students home and made the decision to close two weeks early due to increasing travel restrictions throughout Africa. Moffat’s closure was only 4 days early which mainly meant that we did exams early.

Along with school closures, travel restrictions were announced. The “last” flight out of Kenya was on March 25th. Actually, there have been a few “evacuation flights” organized by different countries since then. Kenya instituted a curfew from 7pm to 5am to minimize evening/night activities and the spread of Covid-19. Travel restrictions and the curfew were followed soon by closures of markets (including the veggie market in Kijabe) and eventually a lockdown of Nairobi and areas along the eastern coast. Most of the markets have opened up now but with restrictions in place – washing hands, wearing masks, and keeping distance.

As things developed, we continually took stock of the situation. Getting supplies was at the top of our list as shopping in Nairobi was now out of the question. We can still go to Naivasha but other options began to appear. A new vegetable supplier, who was having issues exporting, started delivering to Kijabe. RVA also opened up the option for purchasing produce and staples through their suppliers and has continued the German butcher and Brown’s Cheese deliveries. It became apparent relatively quickly that food would likely not be an issue for the foreseeable future. Also, we have enough TP! 🙂 We were also able to stock up on some medications we use. Thank God!

With the kid’s school ending two weeks early, we shifted to some at-home work to try to wrap up their term well. By early April, it was clear that RVA would not start back as normal at the end of April. There was talk of RVA going online for term three for just the first two weeks, but by mid-April RVA had committed to the entire third term (late April to mid-July) online. The kids started on April 27th with “online” school. Since they are in the 2nd and 5th grades, it’s really more like home schooling with a set curriculum. Basically, it takes up most of Maureen’s day. 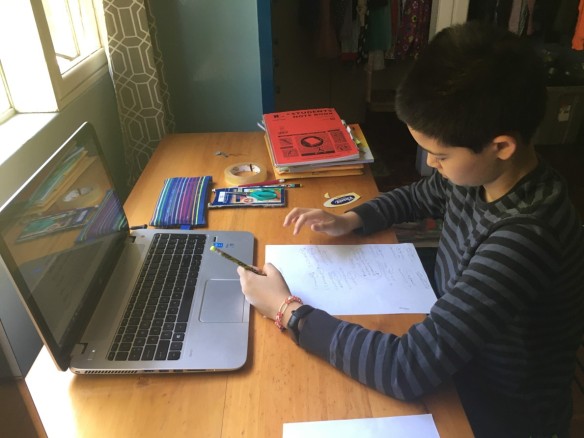 Both kids have been zooming with their teachers and classmates. 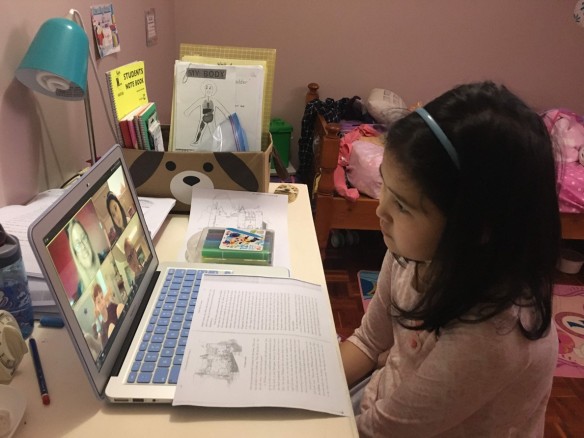 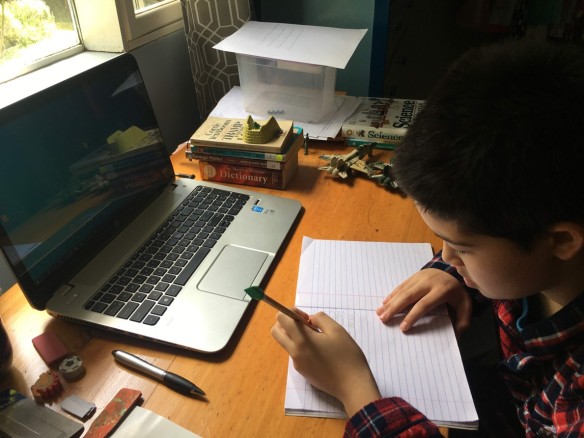 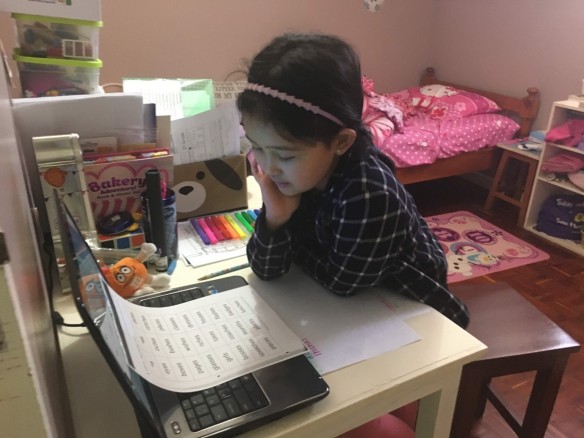 They do miss school and the library is still open a few hours each week. Kate’s teacher printed some work for her and the kids went with Maureen to RVA to pick up the items. They had to wear masks but still wanted to walk around their school. 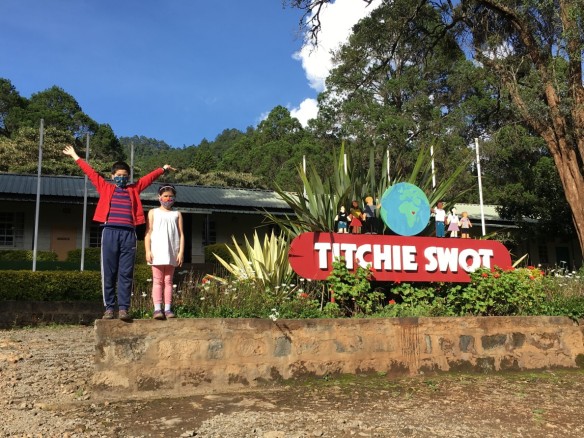 Moffat has also shifted to an online platform. When the government announced school closures in mid-March, I began looking at options. I have become the “IT” guy at Moffat. I oversee the website, email accounts through G-Suite, as well as the internet connection and firewall. All of this fell into my lap during the second half of 2019, although I had already been helping with the internet and firewall for a few years.

I tried several times to get G-Suite for Education from Google for Moffat but Google didn’t respond. Finally, last April/May things started to move and Moffat was able to add this free email service to a recently revamped website which was now being hosted for free. Little did we know at the time that we would also use Google Classroom which comes with G-Suite.

Once the school closure was announce in March, I quickly looked over Google Classroom and determined that it could be used to move Moffat online. I spent the latter part of March setting up a course template, working through some glitches with quizzes, and creating a tutorial for students. At the beginning of April, I showed the principal what could be done and we scheduled training for faculty. I also added a login portal and page to the Moffat website with information about Google Classroom. Classroom is somewhat basic but the phone app works well and is helpful for our students.

I also began communicating with students through email and WhatsApp groups. Before the students left in March, I made sure to get everyone’s email address. After some training sessions and creating a turtorial for making quizzes/exams, the faculty set up their courses. I am also serving as the Finance Manager this academic year which meant that I also oversaw student registration for the term. As students registered (and had issues logging in), I also served as the tech support person. The last month has been really busy with phone calls from faculty asking for help setting up their courses and students seeking help with their classes and/or “negotiating” their registration. We let students register with a half term payment and sometimes with a promise of payment of school fees within the coming week.

There were rough spots along the way but Moffat started online on April 29th. Out of our 75 students, we have 74 enrolled this term. The main issue for students is always school fees and with the economic hit Kenya has taken, it is a miracle that almost all of our students are with us this term. Many just use their phones and visit cyber cafés when they need to submit a long written assignment. The school is quite empty but our students who are set to graduate in July can continue and we can pay our employees. 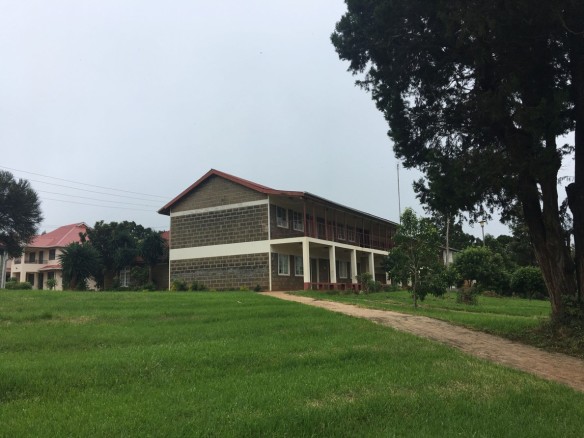 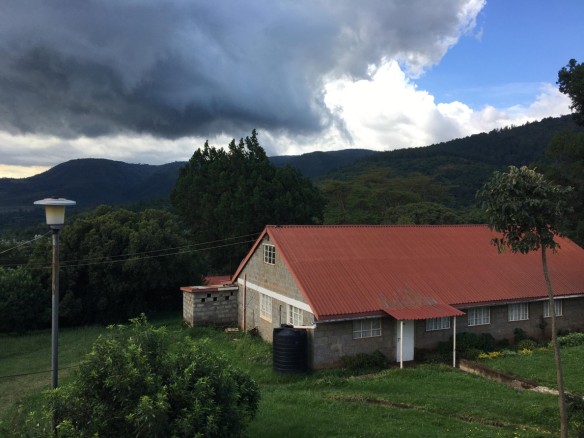 While I was working on the Moffat Online Program, Maureen and the kids volunteered the first weeks of April with a cloth mask and face shield making project to help Kijabe hospital. PPEs are not easy to come by in Kenya and a non-profit that supports the hospital purchased supplies but needed volunteers to make masks and face shields. Overall, the volunteers made 2000 face shields and 750 cloth masks. 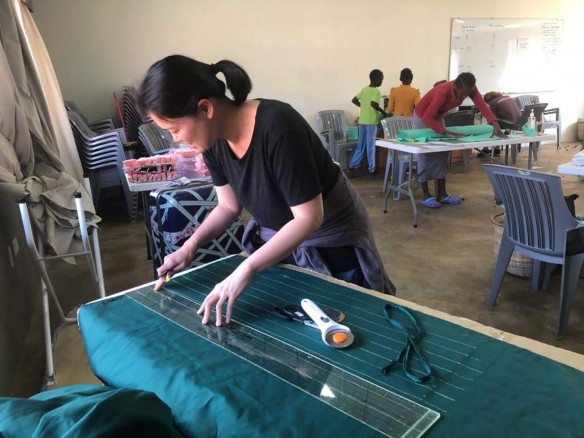 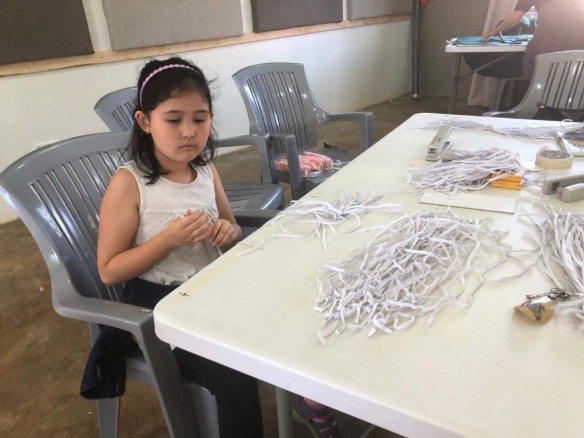 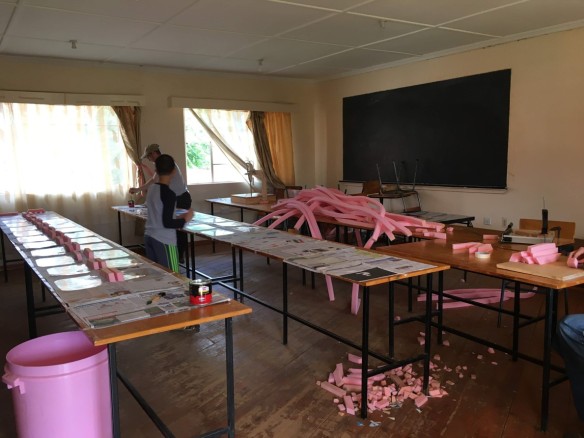 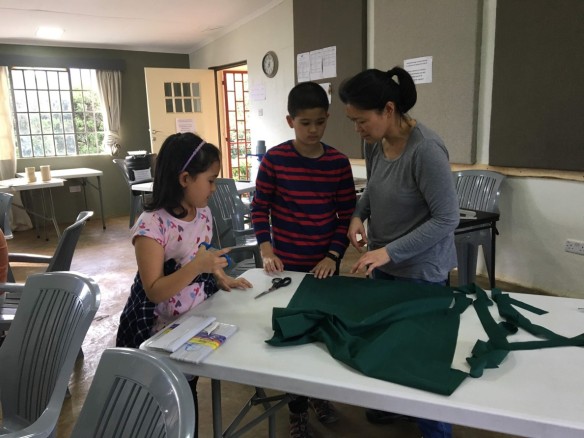 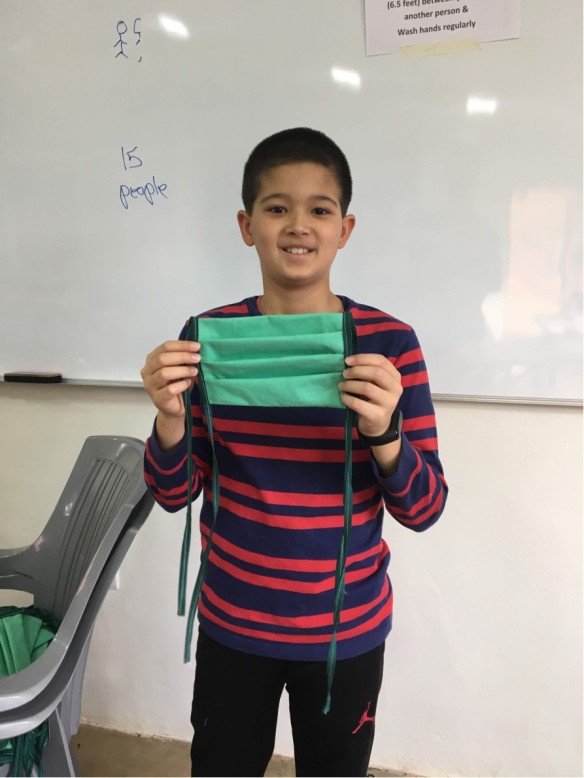 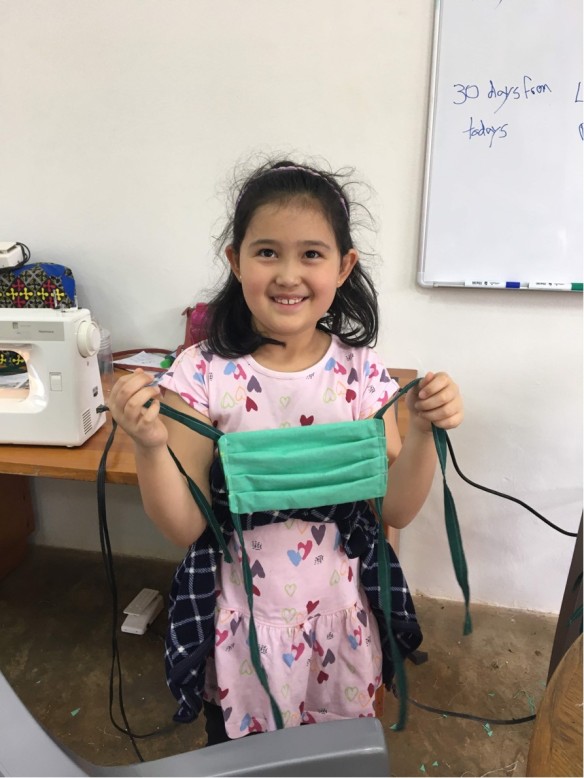 With all of this going on, a virtual plague of Nairobi flies, grasshoppers (green and brown), and some locusts descended upon Kijabe. The grasshoppers are still around but thankfully the Nairobi flies are mostly gone . . . a few still show up in our house. The Nairobi fly is actually a beetle with a substance inside that can “burn” skin when crushed. 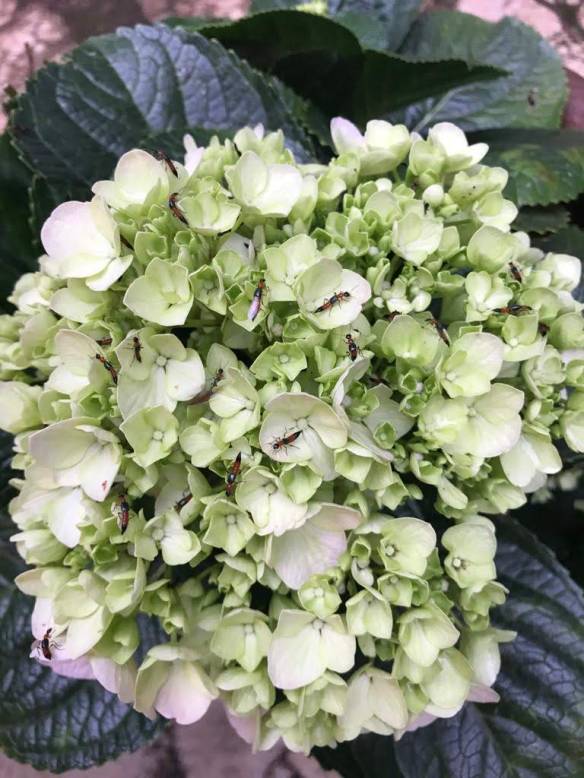 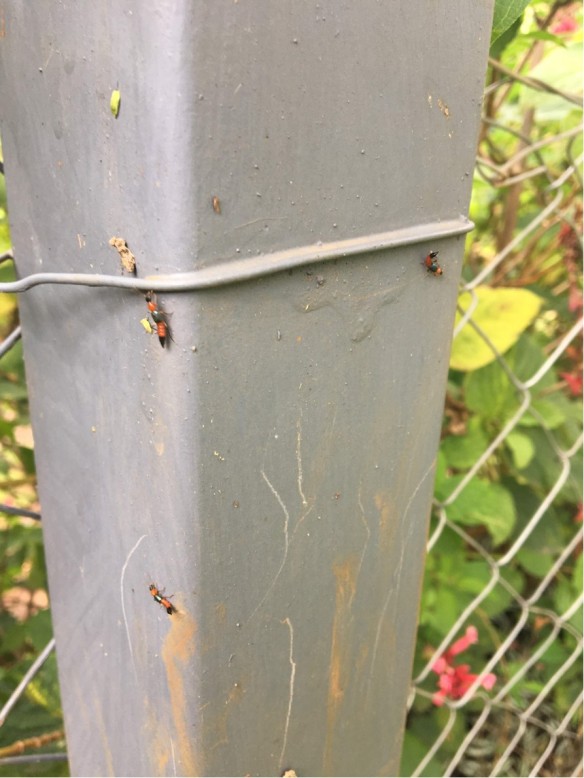 The burning is more like an allergic reaction. Thankfully, hydrocortisone cream works well. This rash dried up in about a day and took several more days to completely heal. 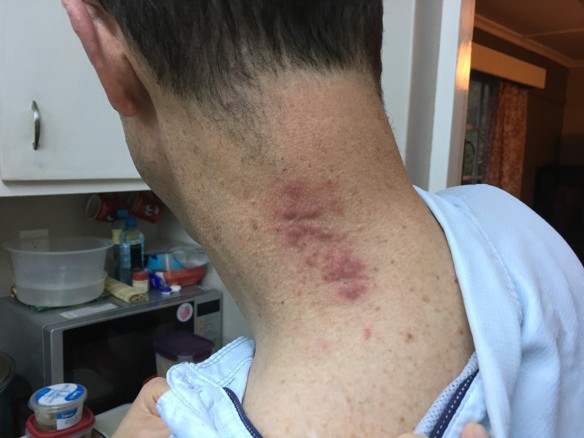 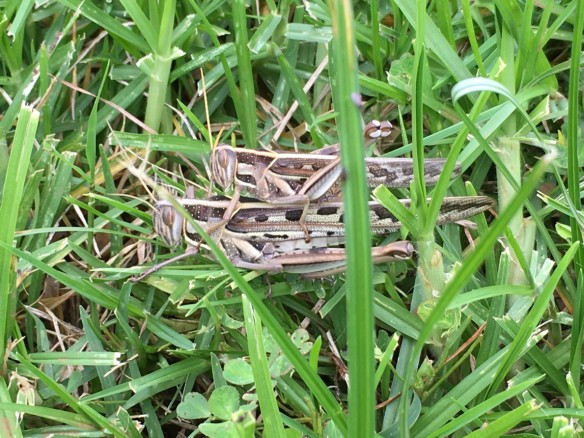 Nairobi flies and grasshoppers are attracted to light, so we ate by candlelight several nights as our windows and doors are not well sealed. 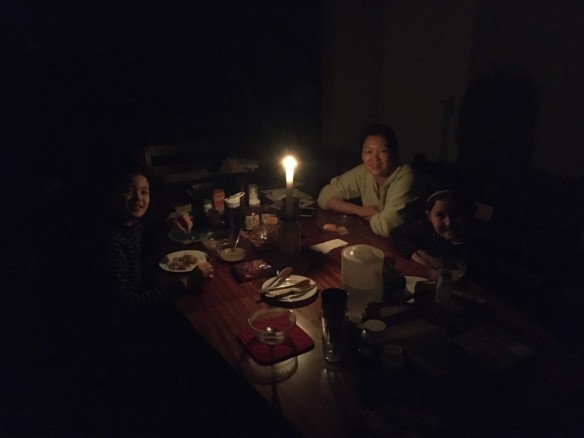 These plagues came along with much rain over the past six weeks. So much so, that a dam north of us gave way on May 3rd. The Matches dam is along the valley wall beyond Old Kijabe Town. We were not in the path of the water and amazingly, no one was injured. The photos below show the washed out dirt under a railroad track just beyond Old Kijabe Town. 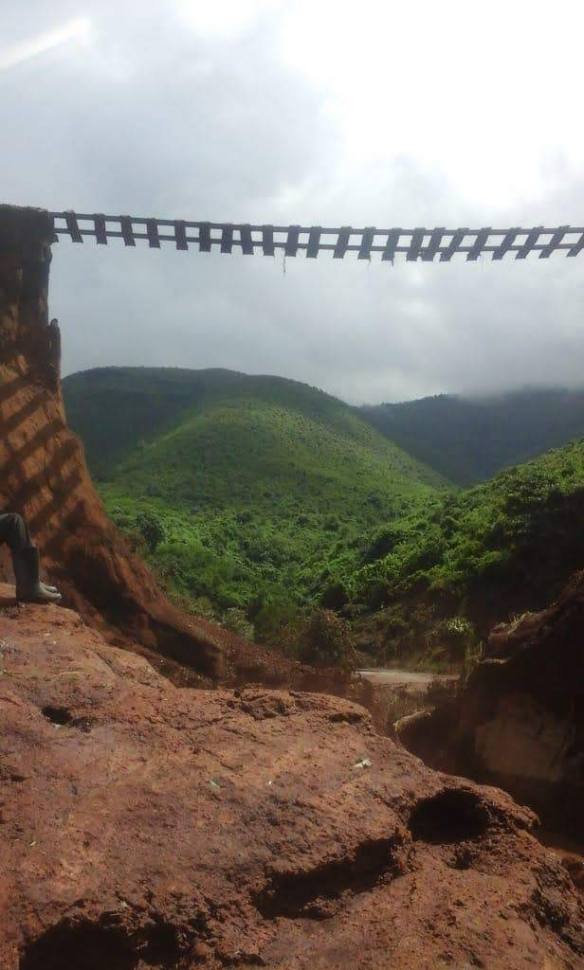 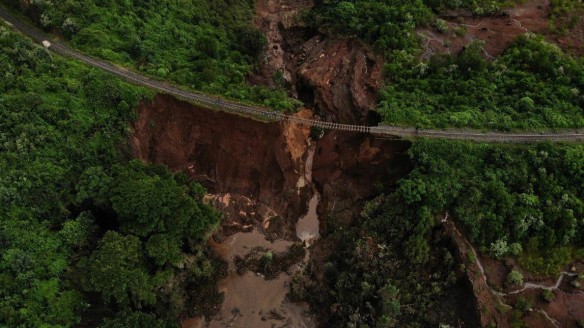 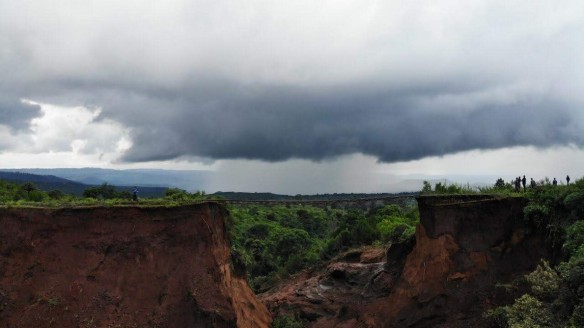 Lastly, we have a home assignment scheduled for July to December . . . not sure how that will work out! 😊